Follow the U.S.-AFGHAN CIRCLE delegation from the Afghan Women’s Association International (AWAI) and WIN when they meet with women leaders in Afghanistan!

CALLING THE CIRCLE OF WOMEN FROM THE US AND AFGHANISTAN:
BECOMING FULL PARTNERS IN DEMOCRACY

May 4-14 2003, a delegation of 8 women from AWAI and WIN visited Afghanistan and found overwhelming evidence that STRONG AFGHAN WOMEN ARE READY TO LEAD IN BUILDING THEIR DEMOCRACY AND ECONOMY.

“Just back from Kabul, we were asked our impressions of Afghanistan. Blown away . we were blown away by so many images and experiences which we had never seen or heard in any media. There was always a breeze on the plateau that is Kabul, sometimes a dusty breeze, but it was the “winds of change.” that we felt blowing mostly. We saw grays and browns of the city and surrounding mountains with mud huts, but counterpoint to the landscape were always the sky blue burqas blowing gracefully – like butterflys. We have a different perspective of the burqa after listening to 30 women leaders – and emerging leaders, talking about their lives, their work, and visions for Afghan women participating in their democracy.”

Purpose of the WIN/AWAI web site: ON-GOING SUPPORT OF AN AFGHAN WOMEN’S NETWORK IN AFGHANISTAN

1. Here you will find evidence that STRONG AFGHAN WOMEN ARE READY TO LEAD IN BUILDING THEIR DEMOCRACY AND ECONOMY. Our combined purpose is to bring a delegation of women leaders from Afghanistan to the US to meet women leaders throughout California (Phase Two). 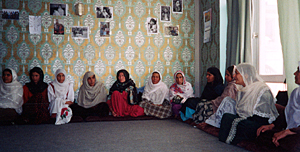 November 2003, News on Afifa Azim in California, in advance of the full Afghan Women’s Delegation Scheduled for Spring 2004. (See the 2004 Diary here!) 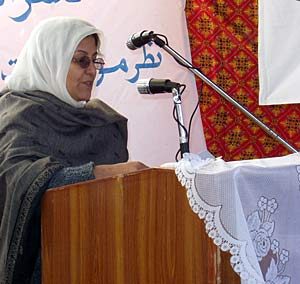 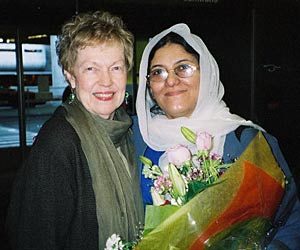 “I work with a large group of women. I have access to both the educated and illiterate women. And to women within the government to build their capacity to work together — so that women have a voice in the constitutional process.”
On November 14 – 17, 2003 Afifa Azim traveled over 12,000 miles to the San Francisco Bay Area and met with native Afghans and women and human rights advocates through the US-AFGHAN CIRCLE, a project of Women’s Intercultural Network (WIN) and Afghan Women’s Association International (AWAI). There were conversations about Afghan women’s progress, how US women can support Afghan organizations and plans were discussed for the delegation of seven Afghan women emerging leaders to come to California in March, 2003, for events throughout the state during International Women’s Month. 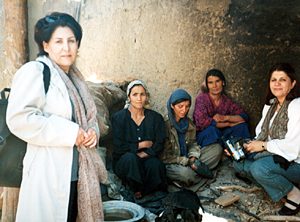 Above, Rona Popal (left) and Nazema Momand(far right) from the U.S. Delegation meet with women who have started a bakery and are succeeding with a micro-economic project.
“In May 2003, I was part of a delegation with the Afghan Women’s Association International and the Women’s Intercultural Network. Our focus was to work with women after war and help them to build ties between U.S. and Afghan women’s organizations. Specifically, our mission was to help Afghan women to participate in their civil and political arena as leaders. 200 international NGOs and 800 Afghani NGOs exist in Kabul. On our trip, we met with representatives from more than twenty women¹s groups, including the Ministry of Women¹s Affairs, to assess their needs on the best ways we can deliver technical assistance.” 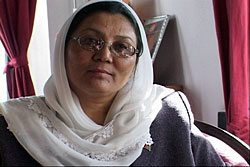 The Minister impressed on us the importance of support from U.S. women in maintaining a Women’s Ministry in Afghanistan 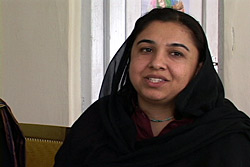 Palwasha Hassan, Director of the Afghan Women Education Center/ Rise for Democracy, met with us on May 8, 2003 to tell us about their work towards peace-building and work with indigenous groups. They receive funding from Canada to promote education about democracy. They support women’s groups with their programs, advise NGOs on how to raise funds, link groups to international foundations, increase political participation of women, provide civic education to inform and get input from people about the new constitution and the implementation of laws. She recently started working with women in Herat due to the increased oppression against women. This group needs trainers on different subjects, especially Islamic scholars to help them in the process of reconstruction. 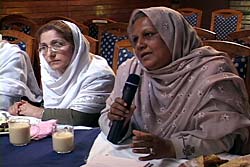 Above, Asafa Kakar addresses the participants in the May 11, 2003 meeting.

Kakar hosted a dinner for our delegation on our last night in Kabul. She invited other members of the body writing a Constitution for Afghanistan. 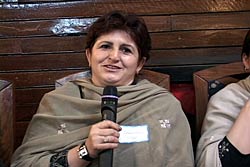 Above, Arian addresses the participants in the May 11, 2003 meeting at Khyber restaurant in Kabul, Afghanistan

May 6, 2003, we met with Fatima Arian, Program Officer at the Asia Foundation, which operates programs related to health, education, domestic violence, and increasing women’s participation in politics. They help fund Ashiana, a program in Kabul which trains about 270 orphan girls in the areas of tailoring, calligraphy, drawing, typing, and computer literacy. The Women Livelihood Center is also supported by Asia Foundation. The Women and Islam project of the Asia foundation will be participating at a conference in Sri Lanka about moderate Islam as practiced by the majority of Muslims around the world. Another program that the Asia Foundation supports is the training of Afghan women journalists in how to document the oral history of Afghan women, which was made into a film called “Afghanistan Unveiled.”

Above, Popalzai addresses the participants in the May 11, 2003 meeting.

The U.S. Delegation visited Popalzai and two students on the campus of Kabul University. The Women’s Council has been an advocate for women’s facilities on campus. These range from simple resources like a women’s toilet to a computer room for women in a new computer center. 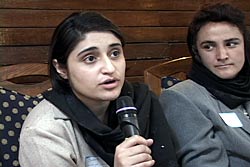 Above, Sweeta Noori addresses the participants in the May 11, 2003 meeting.

Lena Abirafeh and Sweeta Noori of Women to Women International met with us on May 7, 2003. Women to Women collaborates with the Ministry of Women’s Affairs and other NGOs to provides sponsorship programs for about 2300 illiterate, disabled, and very poor women and widows Their programs include training women on women¹s rights and human rights, vocational training, and job placement. Women receive training in baking, beadwork, and jewelry-making as well as capacity building, grant proposal writing, and fundraising. 95% of the sponsors that support women are from the U.S. Sponsors pay $25.00 monthly and $15 goes to the women. 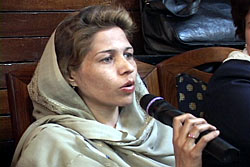 Above, Shekeba Saba Noori addresses the participants in the May 11, 2003 meeting.

As a group, we discussed the criteria for bringing women from Afghanistan in a delegation to visit the U.S., with an emphasis on extending this opportunity to traditionally marginalized emerging women leaders and journalists who do not necessarily have a high-level English language proficiency or computer competence, or a lot of experince in NGOs. Most asked for technical assistance and strengthening computer skills. Many also expressed concern that the timing was not ripe for women to act as leaders in the public. They have a hope that one day women in Afghanistan will have the ability to support each other to participate in elections for governmental positions. 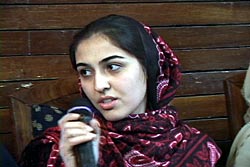 Above, Kakar addresses the participants in the May 11, 2003 meeting at Khyber restaurant in Kabul, Afghanistan

The U.S. Delegation visited W.O.M.A.N. offices in Kabul and made site visits to macro-economic projects including a local bakery run by 3 women and a sewing project. We also visited a sewing class where women of a wide age-range were learning basic hand stitches and how to use a sewing machine that is powered by a hand worked wheel — which can be used in environments that do not have electricity. 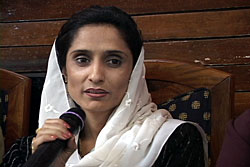 Najiba Bahram, Efat Magazine Above, Bahram addresses the participants in the May 11, 2003 meeting at Khyber restaurant in Kabul, Afghanistan

On May 11, 2003, Mother’s Day, we convened a meeting with representatives from all these different governmental and non-governmental agencies to strengthen the collaboration between each other. All the women received this invitation very well. They were very impressed to see an organization from outside of Afghanistan had the intention of being honest about how we could help them. We tried to be different from other organizations who presented them with empty promises. Through our own experiences, we demonstrated that they have the ability to make a difference. 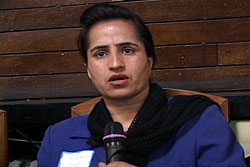 Above, Kohestani addresses the participants in the May 11, 2003 meeting.

On May 11, 2003, Mother’s Day, they were so inspired by each of the delegates that they asked us to open an office in Kabul so they could have a direct relationship with the international women’s community. Women at this gathering expressed their vision for Afghan women living in a democratic society. The majority of women asked to be part of the decision-making process regarding security, rules and laws, and a strong central government. The enforcement of women’s rights were one of their highest concerns. 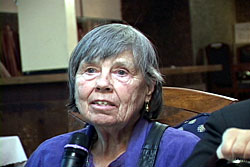 Above, McMakin addresses the participants in the May 11, 2003 meeting.

Members of the U.S. Delegation participated in a half-hour, prime time television program while in Afghanistan. Picture here are Zakia Kohzad, former Afghan journalist, Nazema Momand, who has worked with many refugees from Afghanistan who now live in the U.S., and Rona Popal who is the Executive Director of Afghan Coalition, founder and President of Afghan Women’s Association International (AWAI) 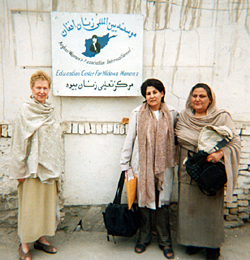 Rona Popal, Executive Director of Afghan Coalition, founder and President of Afghan Women’s Association International (AWAI) based in Fremont, California. She worked for Alameda Social Services for 15 years (1987-2000) and is a representative of the Northern California Afghan community to Loya Jirga (Grand Assembly) in Kabul. She founded the Afghan Women’s Association International in 1992, and has worked for women’s rights since. She graduated from Cal State of Hayward in 1999 with a major in Political Science and International studies.

Marilyn Fowler, President/CEO Women’s Intercultural Network (WIN) is coordinating the Delegation, and has led several delegations of women in cross-cultural exchanges into developing countries including Uganda, 2001 and 2002, China, 1995 and 2000. A full biography is at http://videodocument.org/Uganda/files/participants/Fowler.html

Charlie Toledo is Director of Suscol Intertribal Council, a community-based organization in Napa, and Chair of WIN Board of Directors. She is of Towa/Tiwa ancestry (New Mexico) and has served since 1997 on the executive Board at DQU, the only tribally controlled Community College in California, and one of the first tribal colleges in the U.S. With over twenty years in alternative healthcare fields, she has extensive travel experience in developing countries and a background in mediation and reconciliation.

Elahe Amani, President of the Coalition of Women from Asia and the Middle East (CWAME), and Professor at UC California at Fullerton. She serves as State Chair of International Section of American Association of University Women California, and as a WIN Board Member. As a specialist in conflict resolution who speaks Farsi, Elahe wants to connect the Afghan women’s education to AAUW in California for curriculum and other organizational resources.

Cynthia Gehrie, Ph.D. of The Documentation Partnership is a videographer and ethnographer, who has documented women in several war torn areas including Croatia and Uganda.

Taiba Hosseini is the Office Manager for the Afghan Coalition. She graduated from Kabul University, and received her Master Degree in Public Administration from the University of Nebraska, Omaha, NB. She has been a member of AWIA since 1993 and worked with the Afghan Community since 1992. She has worked in the Ministry of Finance in Kabul. She wants to work with women’s organizations to reconstruct the education system. She attended the UN Panel on Women’s Right, 1999 and has been involved with the Afghan Widows Project and health centers in Herat.

Nazema Momand has been a Medical Translator and Family Plannng Educator for Alameda County Health Care Agency for the past 17 years. She graduated from Kharkoc Institute of culture in the Soviet Union, 1982. She is a Certified Trilingual (Farsi, Pashto, Russian ) translator. She has worked with many Afghan refugees here, and wants the opportunity to visit Afghanistan and start a women’s health project to benefit women and children, especially in the area of family planning.

Zakia Kohzad was an Afghan Journalist for many years with Kabul TV and Radio as the Cultural Director. She is a member of AWAI and interested in connecting Afghan media with U.S. Media. 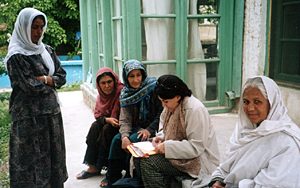 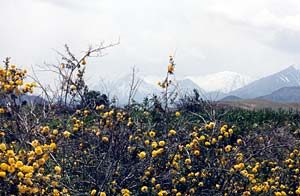 Continue to the 2004 Afghan visit to California!