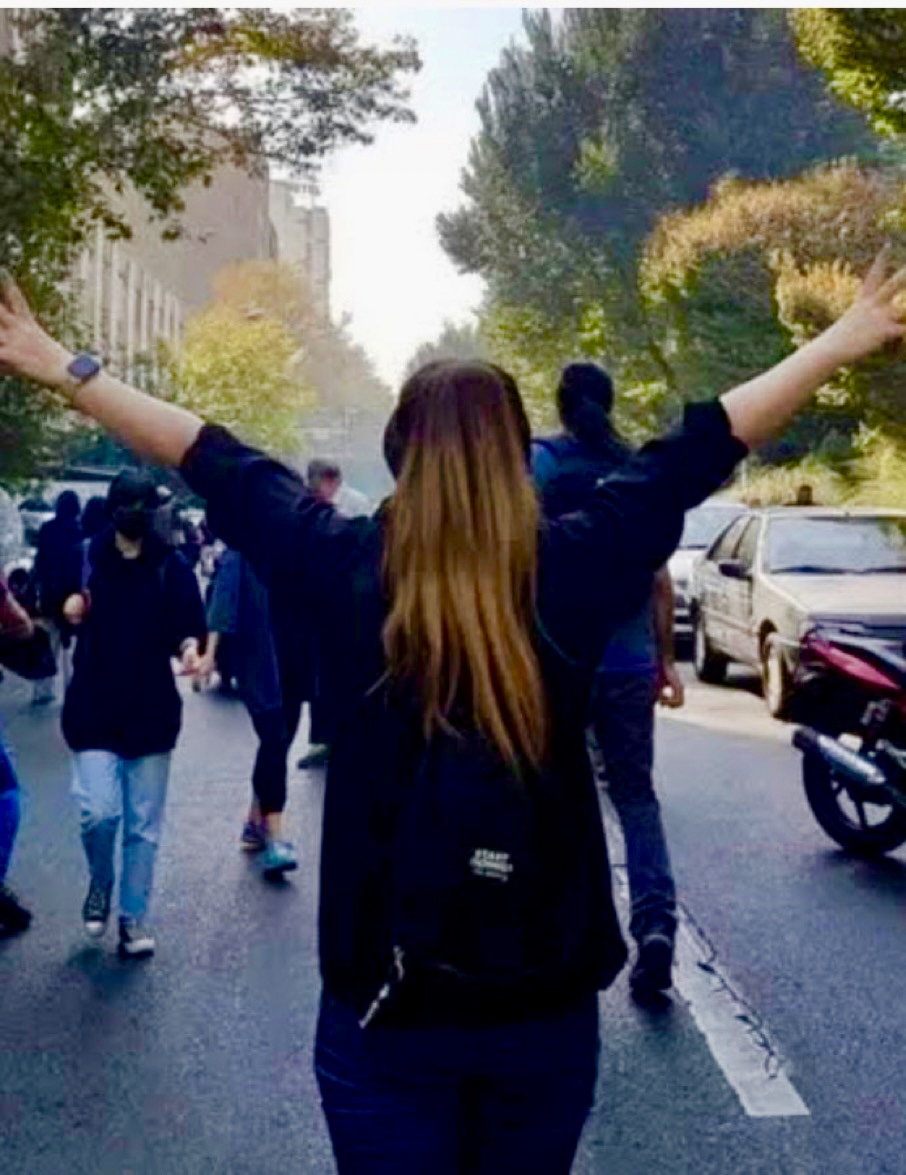 The demonstrations ignited by the police killing of Jian ( Mahsa ) have entered their fourth week in Iran and the Diaspora. On September 16th, the police arrested and beat to death the 22-year-old Kurdish woman, Jian (Mahsa) Amini, on the street in Tehran for her “improper hijab”. The anti-government protests and civil unrest started hours after Jian’s death at the hospital, intensified, spread to all 31 provinces, and within days reached at least 83 cities. Although more than 150 people have been killed, and thousands have been arrested, the protest among the young and old continues.

Iran has seen multiple eruptions of protests over the past years, many of them fueled by desperation over economic difficulties. However, the new wave of protests led by women and girls is against something at the heart of the identity of  Islamic Republic of Iran: the compulsory veil.  The compulsory veil is emblematic of the control, censorship, and oppression of the Iranian people.

At its core this is not about any individual person’s faith; this is about the human rights of the Iranian people, with women and girls leading at the forefront.

Women and girls burned their scarves and cut their hair in powerful displays of defiance.  Political bodies of the generations born and raised in the last 43 years are now revolting against the laws depriving them of their choice, security, and fundamental economic, social, and political rights.

In response to these protests, on September 19th, the Iranian government blocked internet access followed by nationwide restrictions on social media. These actions were intended to curtail freedom of expression, isolate the resistance from the rest of the world, and cover up the abuses of the government.

The slogan “Jin Jîyan Azadî,” or “Women, Life, Freedom,” is a famous Kurdish women’s movement slogan. This was chanted at Amini’s funeral in Saqqez, where she was born. The slogan recognizes respecting a woman’s autonomy and the right to choose what to do with one’s body, whether it is to cover it with hijab or not, and challenging authoritarian regimes and patriarchal power structures.  As many other creative slogans were chanted in the protests, it shows that the uprising is against authoritarian

As the organization that embarked on the Cities for CEDAW campaign in the United States, the only western country that has not ratified CEDAW, we also support the continuous struggle of Iranian women to eliminate all forms of discrimination against women as Iran also has not ratified CEDAW. Please join us in supporting the voices of women and girls in Iran. 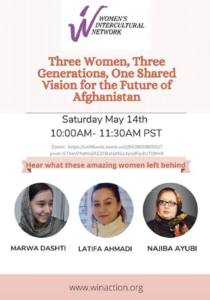 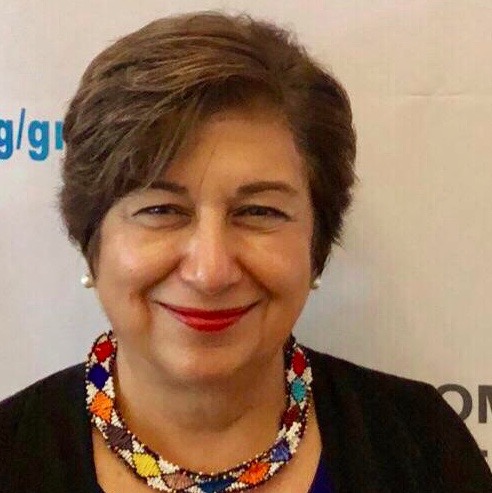 A note by Elahe Amani, Chair of Women’s Intercultural Network
The 66th session of the Commission on the Status of Women (CSW66) the second largest UN intergovernmental meeting in New York closed its two-week-long session on March 25th. The priority theme was achieving gender equality and the empowerment of all women and girls in the context of climate change, environmental and disaster risk reduction policies and programs, and the review theme was women’s economic empowerment in the changing world of work

(agreed conclusions of the sixty-first session).

were groundbreaking and therefore ‘historic’ for the UN as it is the first time CSW has recognized the connections between climate change and gender equality and confirmed that all women and girls are disproportionately affected by the impact of climate change such as droughts and floods and other environmental crises, and offer specific actions which the Member States, UN agencies and Civil Society/NGOs can take to ensure resilience, mitigation, and sustainable recovery, especially for all women and girls.

This historic session acknowledged and reaffirmed women’s and girls’ leadership as a key to addressing climate change, environmental, and disaster risk reduction for all.
The agreed conclusions adopted by the Member States are a blueprint for world leaders to promote women’s and girls’ full and equal participation and leadership in the designing and implementation of climate change, environmental and disaster risk reduction (DRR) policies and programs moving forward.
What the

Statement of the CEDAW Committee expressed at the 44th session on August 7, 2009

, on Gender and Climate Change envisioned that “women are not just helpless victims of climate change – they are powerful agents of change and their leadership is critical. “ became a reality by the CSW66 historical Agreed Conclusion.

Here are the sessions organized by WIN and those we are thankful we had the opportunity to contribute and present. 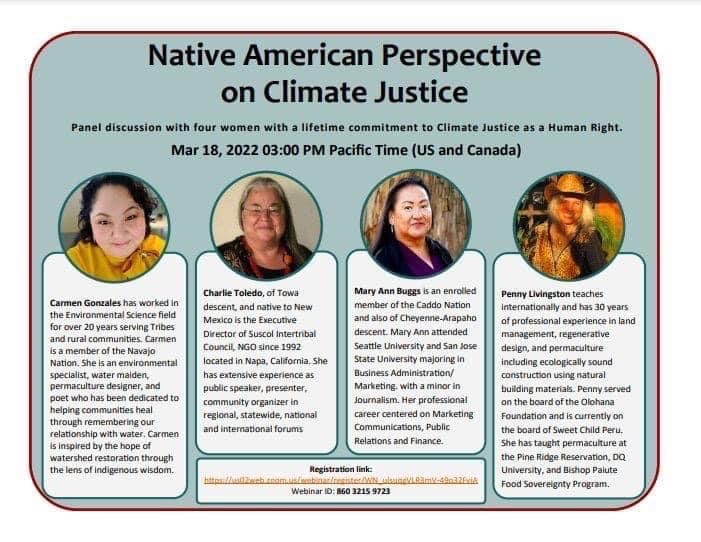 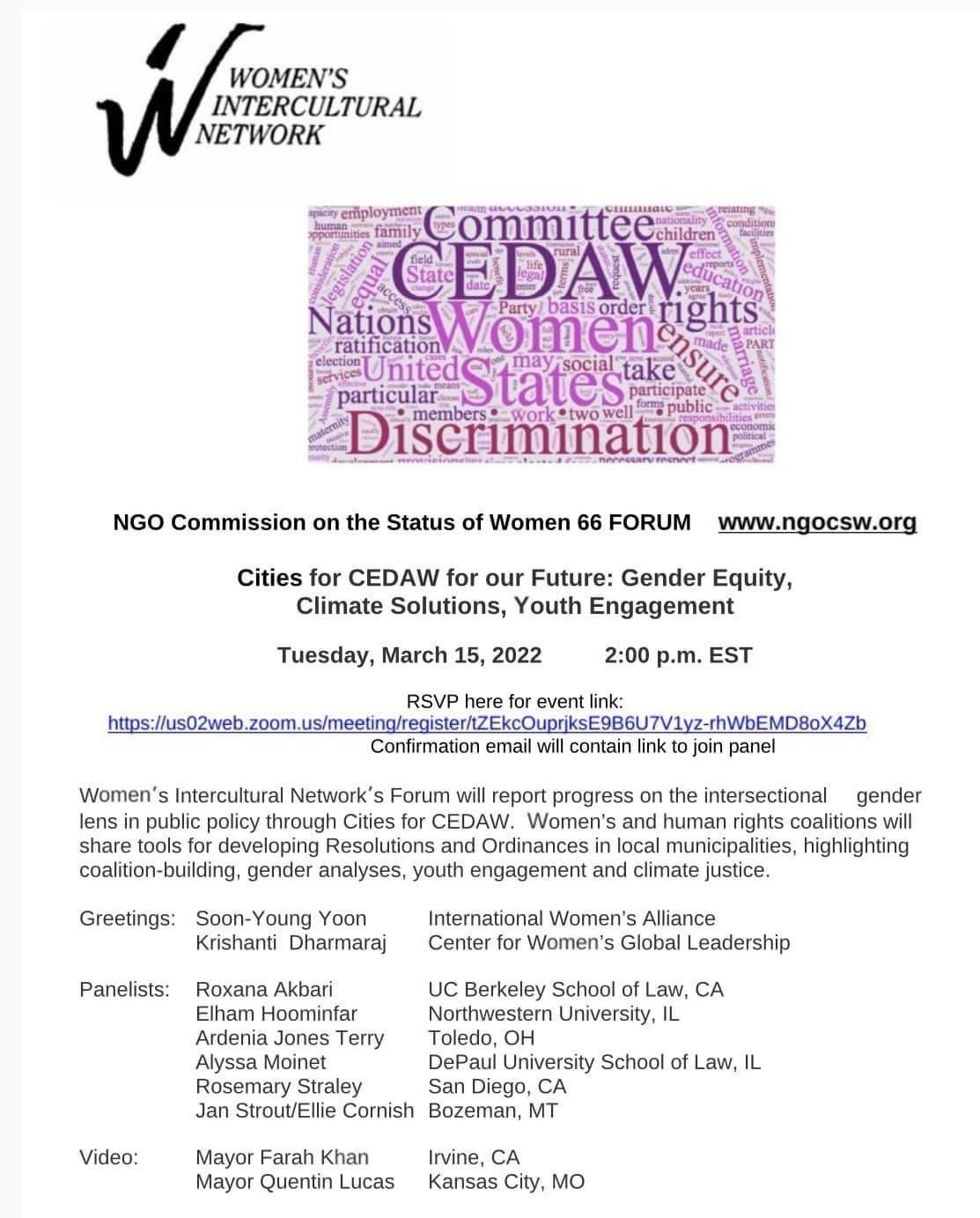 Since 2014, the Cities for CEDAW Campaign has been a highlight of WIN’s presentations for the UN NGO Commission on the Status of Women Forum. This year at CSW66, WIN offered an outstanding panel and an important discussion of women’s rights in our grassroots communities. We heard from a diversity of cities, East-West, urban-rural, Bozeman, MT, San Diego, CA, and Toledo OH, with a progress report on their efforts to partner human rights with public policy, seeking CEDAW Resolutions or Ordinances. Two mayors, from Irvine, CA, and Toledo, OH, sent videos, showcasing their efforts and support on behalf of women and girls in their communities. 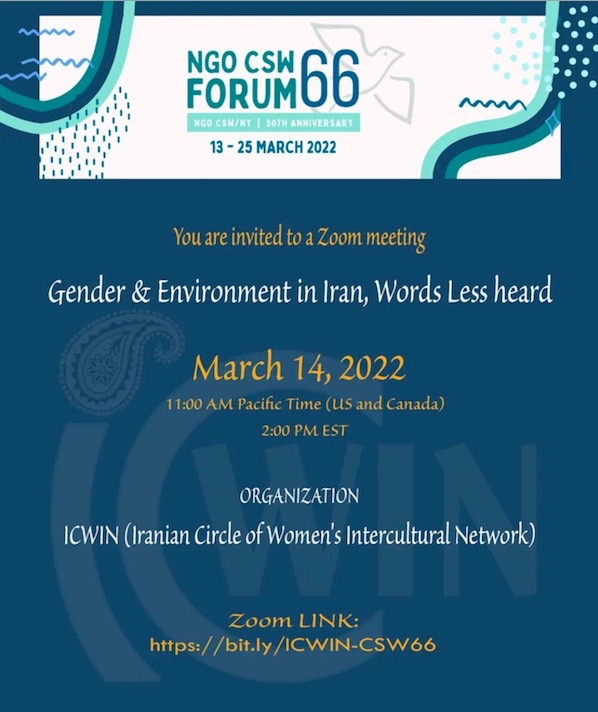 presented this panel -the only session on Gender and environment in Iran presented by an NGO. Speakers of the panel :

Elham Homminfar, WIN Board member,
Asam Bahrami, a well-published activist on gender and environment from Italy, and Elahe Amani, WIN Chair each shared their perspective on Gender and Environment in Iran. The panel was moderated by Ruja Moshtaghi, a board member of ICWIN. 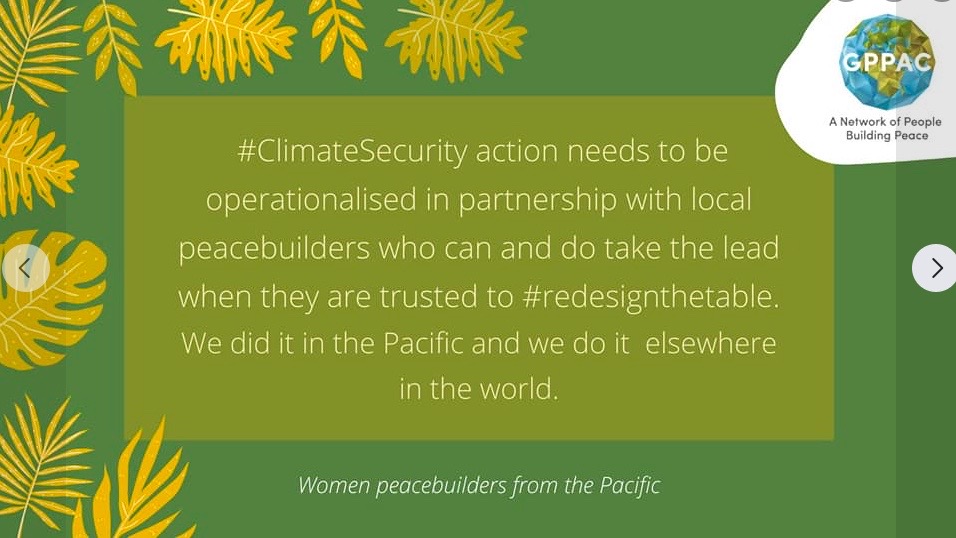 24 March 2022 | 12:30pm-2:00pm EST Women’s Intercultural Network joined with  Global Partnership for the Prevention of Armed Conflict (GPPAC), UN Women, Shifting the Power Coalition, and the Australian Mission to co-sponsor A virtual informal discussion on how some of the key recommendations of CSW 66 can be operationalized in practice through existing platforms (i.e., the UNSC and UN Climate and Security Mechanism, the Women, Peace and Security and Humanitarian Action Compact (WPS-HA Compact, etc.)

Given the backdrop of UN Security Council Resolution 2242 (S/RES/2242) recognizing the impacts of climate change and the global nature of health pandemics on the trajectory of conflict, and given the inaugural meeting of the Informal Expert Group on Climate and Security in November 2020, which was followed in February 2021, by the UNSC convening for a high-level open debate on climate and security,  governments and civil society recognize the linkage between climate vulnerability and conflict fragility.

In this discussion, global peacebuilding and development experts shared the key takeaways from the CSW discussions and the ways the key commitments can inform peacebuilding and development action. This discussion continued building on the ongoing progress in the development of global policy and finance supporting climate security action, including from an intersectional feminist perspective. References were made to important lessons learned from local peacebuilding networks – through their various entry points – who have been able to consolidate knowledge and expertise on climate and security and systematize information exchange through institutionalized channels of multi-stakeholder action. Noted was UNDP report “What Infrastructures for Peace support Peacebuilding in the context of Fragility and Crisis”.

Christine Clarke, Ambassador for Women and Girls, the representative of Australia 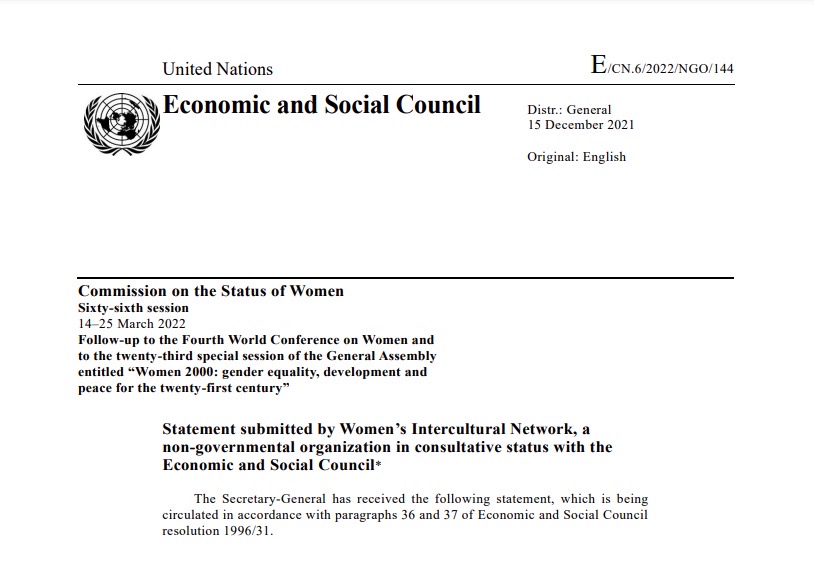 E/CN.6/2022/NGO/144
Agenda 2030 puts gender equality at the core of sustainable and inclusive
development. Realizing gender equality and the empowerment of women and girls
will make a crucial contribution to progress across all the Goals and targets. The
achievement of full human potential and of sustainable development is not possible
if one half of humanity continues to be denied its full human rights and opportunities.
(UNFPA) Gender must be mainstreamed. Sustainable Development Goal 5
recognized gender equality as a fundamental right in itself, and instrumentally
valuable as a necessary foundation for a peaceful, prosperous and sustainable world.
Despite this recognition, equality remains elusive.
The brunt of the dual crises of the COVID-19 global pandemic and the economic
“she-cession” has been shouldered by women, with effects exacerbated along existing
racial, social, and economic lines. These crises intersect with the climate crises to
create a trifecta of vulnerability for the most marginalized. It’s the world’s poorest
and those in vulnerable situations, especially women and girls, who bear the brunt of
environmental, economic, and social impacts. Women and girls face greater health and
safety risks, as water and sanitation systems become compromised and in situations
of scarcity, they take on increased domestic and care work.
Through their experiences as early adopters of holistic and regenerative
agricultural techniques, first responders in crises, entrepreneurs of green energy, and
decision-makers at home, women offer valuable insights and solutions into better
managing the climate’s changes and its risks. Despite this, their collective and
individual lived experience and leadership are often overlooked and undervalued.
Building a sustainable future entails harnessing the knowledge, skills, and leadership
of women in climate action. Because women sit precariously at the intersection of
many daunting social problems including poverty, climate change, and violence, it is
critical that they be safe and empowered to reach their full potential. Gender mainstreaming will accelerate progress across all SDG’s. It’s no wonder then that
women’s leadership is explicitly called for in the preamble to the Paris Accord.
Achieving gender equality and the empowerment of all women and girls in the
context of climate change, environmental and disaster risk reduction policies and
programs is an urgent multilateral and multi-stakeholder endeavor.
UN Women has identified important priorities: 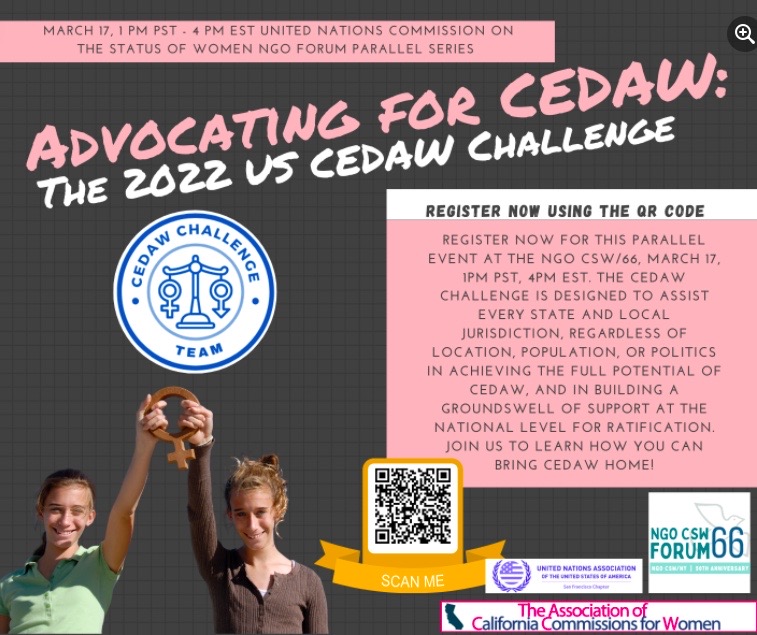 Thanks, to the CEDAW Challenge Team and Nancy Bremeau leadership for organizing this event and inviting Elahe Amani & Gail James of WIN/Cities for the CEDAW campaign to share the space with other panelists
Bartholow, Jessica
Mary Hansel
Parisa Ijadi-Maghsoodi
Lisa Liddle
Ashley Raveche 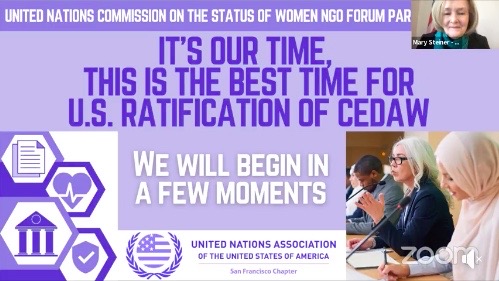 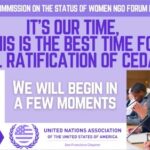 Thanks to UNA San Francisco and the leadership of Mary Steiner for the opportunity given to WIN Cities for CEDAW Campaign to be part of this event. The Ratify Movement is a historic collaboration of leading civil society organizations educating and advocating for the ratification of the UN Convention to Eliminate all Forms of Discrimination Against Women (CEDAW).